Crash protection bars, slider etc, are they worth it? 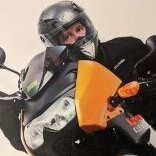 By Throttled,
October 10 in Clothing, Luggage, Accessories and Security